Pictures and stories from Maastricht Airport in the early years.
Post Reply
4 posts • Page 1 of 1

Scibe Zaïre is the subject in the final part about conflicts and and diversions between Belgium and Zaïre. The airliner was founded in 1976 as SBZ Cargo. After some years the airline started domestic PAX services with two B727's. Lateron a 707 came into their fleet.
In 1986 they started their flights to Brussels with that 707 and a second one, wich was recently added to their fleet. However, in March of that year, a couple of weeks after the inaugural flight from Lubumbashi to Brussels a new conflict between the Belgian and Zaire's government occured...
And yes; for two weeks Scibe Zaïre used MST for their two weekly passenger service and once a week cargo service. Arrival of the PAX services were on Saturday evening and Wednesday evening. Departure on Sunday and Thursday afternoon. The cargo flight showed up un Thursday.

The first in line was their B707C 9Q-CBS, here resting on the tarmac on Sundaymorning.

On the next Wednesday it was also the CBS, but a week later on Saturday they showed up with their newest toy, B707 9Q-CBL.

This was a full PAX 707 without cargodoor.

Their cargoservices was only flown once at Beek by their L-100-30. But I cannot find any registration of the plane, as I didn't catched it at MST. The Lockheed was seen by me at Brussels in 1988, for sale at Abelag without any marks on the fuselage.

That trip to Brussels was one of those where the weather supposed to be sunny, but the clouds remained all day. During that day the 9Q-CBL passed by without titels.

In 1993 I was able to catched their DC-10-30 F-GHOI wich was leased from UTA and subleased to Taino, an airline based in the Dominican Republic. I catched the DC-10 while on approach at runway 07R in Frankfurt.

Scibe ceased their operations in 1998.
Top 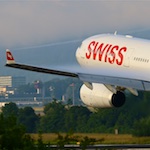 Again very nice shots and nice history in the text